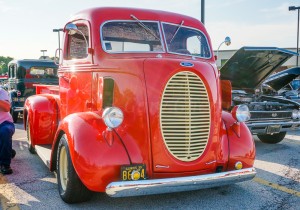 Jim purchased this truck six years ago (2007) from FL [see before pictures] and at the age of 70, began its restoration!  He completed all of the frame and body work and painted the cab himself.  All of his car restoration works had been completed in a typical two-car garage space on his property in Elmhurst, IL.  He was about three quarters of the way finished with the truck when” he had to stop “and was unable get the engine wired and running.  He hired Tim Munday (Elburn, IL) who helped him with this process.  Another friend, Bill Balogh assembled and painted the rear fenders (fiberglass) along with the bed.  Dad was then able to roll her out for the 2013 Car Show Season in and around Chicagoland!  As you can see by the additional descriptions below, he built this truck for himself, piecing it together to create the unique and “cute” look it presents!  In 1939, there was no such truck available (a COE pick-up truck).  He intentionally created this look.  The original truck would have been a ‘box truck’.”

The vehicle is build around a 1987 Chevy Half-Ton Pick-Up Truck with 36” of the frame cut-off and removed between the wheelbase, making it a 102” wheelbase. The color is Chrysler Viper Red. The bed was:

customized to my desire width with the stock 8 footer 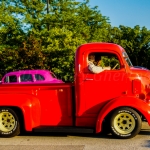 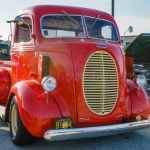 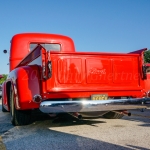 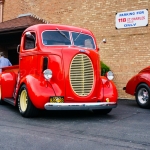 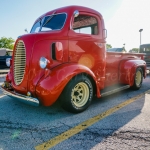 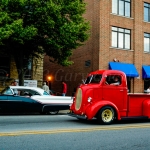 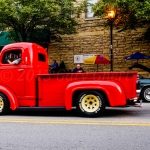 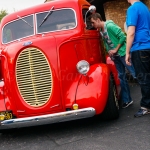 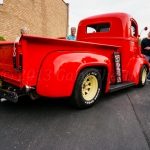 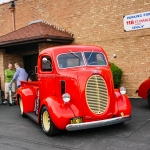 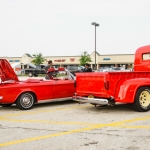 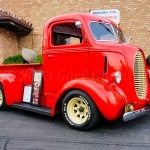 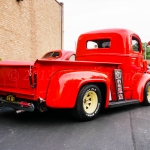 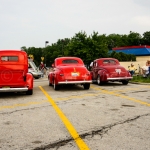 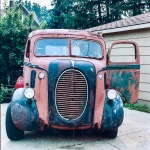 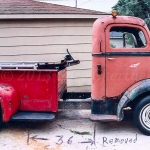