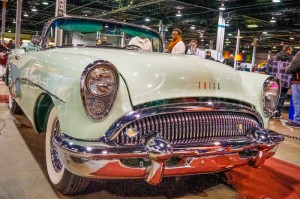 Art’s first show car was a 1956 Buick Special (and there was one near this car but I didn’t get much of a picture). Art’s Lido green 1954 Buick Skylark convertible was ‘restored authentic’. All of the 836 Skylarks that year were convertibles as were all 1953 Skylarks except for a ‘one of one’  2-door hardtop, which was built for a Buick executive. When he first bought the car in 2001, it had been repainted a blue-green and white two tone but Art wanted it to match facory specs (actually Buick didn’t offer two-tone until 1955 models).  Skylark was the ‘top of the line’ for Buick and it was built on the Buick Special chassis. This was the first year all Buicks had 12 volt electrical systems. The Skylark was built only in 1953 & 1954, until being revived as a small car in 1961. 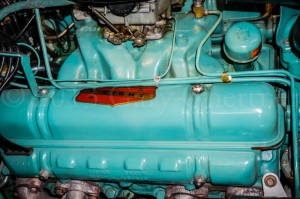 The 200 horsepower motor (painted ‘apple green’ as from the factory) is a 322 cubic inch ‘Nailhead’ V-8 which was used by Buick from 1954 (264 ci) to 1966 (425 ci), the latter having been used in Riviera, Electra and Wildcat models. (Also discussed here). The valve covers are straight up and down (not aligned with the Vee) and there are spark plug covers.

The Buick V-8 was originally called the “Nail Valve” by early hot rodders because the valves looked like nails since the stems were so long and the heads were small. At some
point “Nail Valve” got replaced by “Nailhead.” 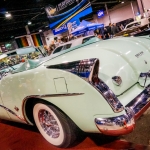 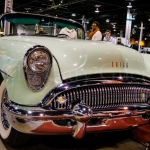 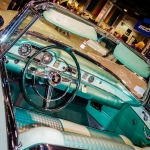 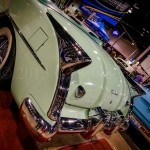 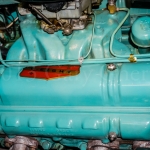 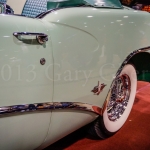 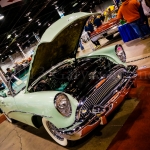 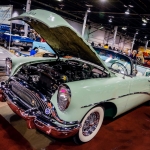 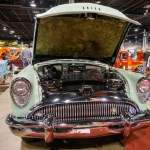