The weather was threatening but cleared up in time for a good number of cars but Flashback 50s DJ Tony didn’t bring his 57 Chevy booth. Click here for YouTube videos of music he played. 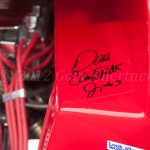 My car story from this show is Ron’s ’33 Ford Three Window Coupe hot rod, and it is painted RED. He went to great lengths to have his dream car and he’s owned this hot rod over 17 years (Dale Earnhardt signed the car in 1995 at an Indianapolis show).

‘Everything’ is customized with a ’96 Corvette LS-1 motor and fuel injection (earlier he had a bigger motor). The rear end and rear suspension are from an ’88 Corvette.  Ron added the custom interior and suicide doors. Creature comforts adorn the interior. 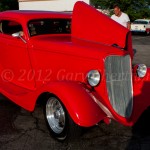 Ron loves fast cars and had two drag racing cars, a ’41 Willy’s and a 55 Chevy. His next endeavor was a ’69 Camaro that was a show car.  So his love for hot cars “what’s life without drag racing” goes back to high school.