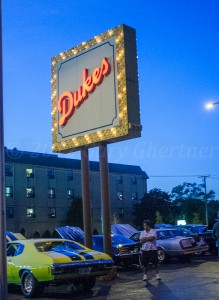 My first visit to Duke’s was a great experience; it’s the same night as one of my favorites (Lombard) but has a longer season so I plan to return. This event had some great classics (OMG, I’m calling Fords & Chevys, that flourished in my lifetime,’classic’), muscle cars and many drag race cars. There was a helluva lot of noise from cars arriving, leaving and just revving. This event was ‘drag night’ and was dedicated to Marty Bilecki, Jr.

Oldies music (and loud engines) ‘filled the air waves’ and the selections were eclectic; listen here to YouTube videos of the original artists performing some of the tracks heard at Duke’s. 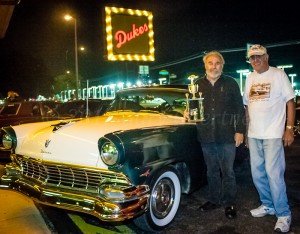 Terry’s green and white 1956 Ford Victoria hardtop caught my eye the moment it arrived and he’s owned it since 1970 so he will place high on my “Rogue’s gallery” of long time owners. This car, with a 292 V-8 is restored original except for a few performance (tri-power) and creature comforts (A/C and sound system).

I finally managed to get a number of pictures of Rich’s midnight blue ’58 Plymouth Savoy so I have enough to make a gallery page. He has a 331 Hemi engine from a ’55 Chrysler (the hemi having been dropped that option in ’58). The interior has all been updated and he took out the push-button gear shift in favor of a console mount. 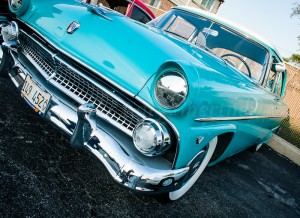 Sal and Dee drove their light green 1955 Ford Customline, which he’s owned 27 years (Sal’s car also belongs in my ‘Rogue’s gallery‘). He was an over the road trucker until three years ago so putting miles on this classic has not been easy as they’ve only driven 10,000 of the total 51,000 original miles. This 2 door sedan has a 272 V-8, dual exhaust with ‘three on the tree’ and a 4-barrel caruburetor. The body and motor are original, although it was repainted a slightly different color; the recently installed upholstery is more modern. This car is power-nothing: ‘no power steering, no power brakes,no air conditioning’.
top of page 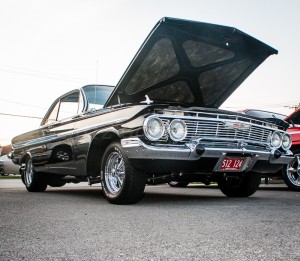 There were many Chevys but I struck up a conversation with Harold about his black ’61 Impala Super Sport. It’s mostly original with a 348 and the color is Tuxedo black. Tri-power was added. He changed the interior from two tone “dull” gray to two tone blue and matched the accent stripe to the upholstery. 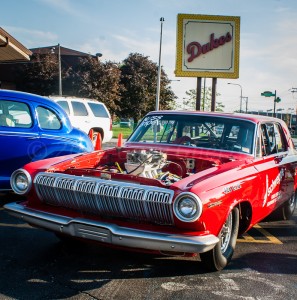 Bill inquired about my Lytro camera as he’d seen them in a magazine but never up close; and of course I asked about his car. His vehicle, driven by Mike, is a red 1963 Dodge Polara. Bill’s Dodge is a drag race machine, in the Nostalgia/Super Stock class and it has to be trailered everywhere so I’m guessing those two were ‘up past bedtime’ before this Dodge was put away for the night. Power is by a 426 Chrysler mill with two four barrel carburetors.


This entry was posted in 2012, 2012 Duke's in Bridgeview and tagged 2012, Bridgeview, CruiseNight, Duke's, Tribute, YouTube_Links. Bookmark the permalink.