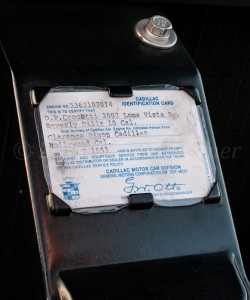 Frank’s  aquamarine ’53 Cadillac Coupe de Ville  was more rounded than sleek as was my memory of long ’50s Caddy’s with tail fins, like these page header images from Lombard Cruise nights on 7-14-2012 (a ’59 Cadillac coupe) and 8-11-2012 (a ’60 El Dorado). As I was shooting I heard him talking about the first owner of the car, whose name, D.P. Crocetti, was typed on a Cadillac Motor Division ID card that Frank had found in the defroster vent. Crocetti had lived at 2002 Loma Vista Drive in Beverly Hills, Ca. Of course Frank finished the story and having done the sleuthing to find out that D.P. Crocetti (Dino Paul Crocetti) was much better known by his professional name, Dean Martin. The paint is an El Dorado color which was a special order.

He’s owned this Caddy about 12 years.

Frank was hot rodding before the manufacturers offered souped up options. His first car was also a 1953 Cadillac to which he added a 428 Cadillac motor with two 4-barrel carburetors had had it painted midnight blue. He added a hydramatic transmisison which allowed precise gear settings so it wouldn’t automatically shift out of the selected gear as you accelerated. This car was a ‘sleeper’ drag racer and he won enough money to buy a one year old ’61 Buick Electra. Hopefully he can find pictures of the blue Caddy. 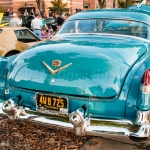 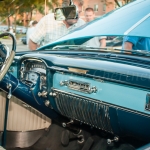 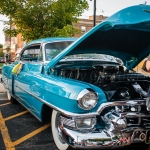 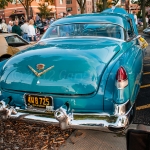 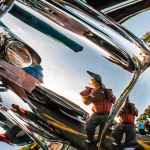 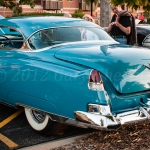 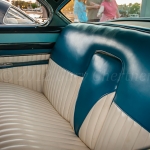 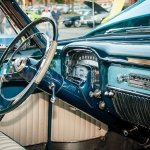 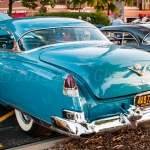