Jim bought this car in 2011 from Vic Petco, who had restored it. In the five months since February 2012, Jim has driven it 5,000 miles across 5 states; what use is a car that isn’t driven.

The Graham brothers started a company in 1919 to modify Ford Model T & TT’s into trucks. Then they built trucks using Dodge engines that were sold by Dodge dealers; and Dodge bought the Graham brother’s truck business in 1925. In 1927 they began manufacturing automobiles.

Most Grahams were four door models but demand drove the company to chop the body to a two door coupe. The Graham brothers were Catholic and benefactors of the Church; they gave Pope Pius XII a custom made Graham-Paige Landaulet, which was the first Pope-mobile; this is also documented in a book, The Graham Legacy, Graham-Paige to 1932 by Michael E. Keller. From 1934, an optional supercharger  was available. In fact, a supercharged Graham won the Mobil economy run three times during the late 30s. In 1938, 18,000 Grahams were sold yet in total for 1939,1940 & 1941 only 8,000 were sold. Even though the car was competitively priced with Buick, Oldsmobile and Packard (the 1940 Graham cost $ 940) the public didn’t buy them. Automobile production ended in 1947 when all the stock was sold to Kaiser-Frazer.

Only about 20 remain today; it is rarer than the also ‘ahead of it’s time’ Tucker. I missed a chance to photograph one of those on father’s Day 2011 but had no idea I’d want pictures now.

It’s a Retro-Rod. The body (dubbed ‘shark-nose’) is stock but it is a custom hot rod inside. Power is by Chevrolet … a ‘small block’ 350 cubic inch 330 horsepower. The trans is 700R4 overdrive. The read end is a 12 bolt Chevy. The suspension is late-model Chevy. It’s air conditioned and power-everything. 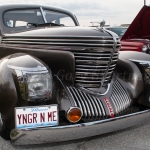 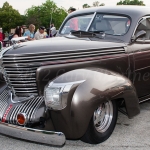 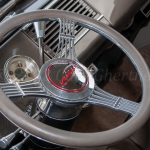 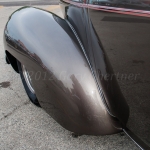 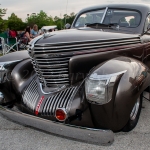 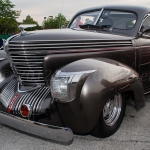 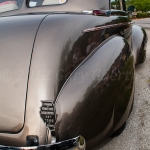 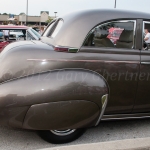 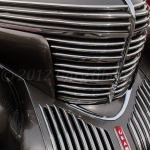 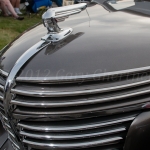